Haunted by “The Shining” and Scooby Doo

After finishing Doctor Sleep, Stephen King’s newest novel which checks in on Danny Torrance 30 years after the horrors at The Overlook Hotel, I decided to go back and re-read The Shining

I saw Kubrick’s film adaptation of The Shining for the first time when I was five years old, the same age as Danny Torrance. Wisest choice for a five-year-old? Probably not… no, strike that. Absolutely not. Not only did I see a kid on-screen that was the same age as me but I also saw a kid who was at a hotel with his parents during the winter. My mom worked the front desk of a Holiday Inn in Connecticut at this time and during the winter, when the season was dead and the hotel was void of guests, she would bring me to work and let me explore. But not just “wander the halls on foot” explore, but “ride my Big Wheel” explore. Yeah, if you’ve seen the Kubrick film than you know how absolutely terrified I was to see this kid on-screen, doing what I did on a semi-regular basis, but running into terrifying ghosts around his corners. (I stopped riding my Big Wheel at the hotel after seeing the movie.)

Much of the movie haunted me as I was growing up. The smiling faces of the twins (who are now on Twitter) were burned into my memory. The sinister smile that was frozen on Jack’s face, regardless of his mood or intent, was etched on my brain.

I read the book a few years ago but, after reading Doctor Sleep, I wanted to go back and, maybe, test myself and see how it held up now that I was older. So I did. And I was fine.

Pushing it, I decided to re-watch the film. Bonus, I would get to introduce Matt to The Shining and share the terror with him. So last night we watching 1980 Kubrick film.

Well, as a grown up, I am proud to say I was not as terrified as when I was five. Yes, it is still a frightening film but I was able to watch without closing my eyes and without shielding myself behind our dog.

But then a very weird series of things happened.

This morning I was half-watching TV and, after flipping through channels for a few minutes, landed on the Travel Channel’s Hotel Secrets and Legends. This show featured a few hotels and their sordid histories but one in particular snapped me out of my partially attentive state as it explained how a young Stephen King, along with his wife and son, had come to the Stanley Hotel and experienced an unsettling haunting and terrifying nightmare during his stay… inspiring him to write The Shining.

Then, as I was doing the dishes, I turned on Netflix and started an episode of Scooby Doo! Mystery Incorporated, Cartoon Network’s reimagining of the classic series. It’s a fun way to kill time and I’m a huge Scooby fan dating back to my childhood (pre- and post-The Shining). The episode, titled Night Terrors, find the gang stranded at a mysterious old mansion where they are struck by nightmares. Scooby’s involves searching for Shaggy through the mansion’s hallways. He hears Shaggy softly calling his name from inside one room and he pushes his way inside. There, in the room’s private bathroom, he stumbles on a scene that was eerily familiar.

Note the side-by-side screen captures below. 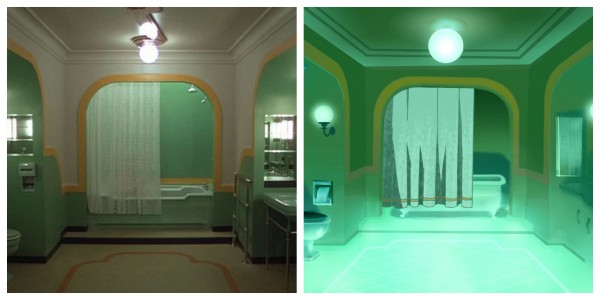 That’s two, very odd, very different connections to The Shining in a single day. What’s going on universe? Trying to tell me something? If it is “Don’t agree to serve as caretaker at a resort for five months over the otherwise-closed winter season,” don’t worry. I’m not considering any offers… now or in the future.

This site uses Akismet to reduce spam. Learn how your comment data is processed.