NYC and the Case of the Missing Consideration 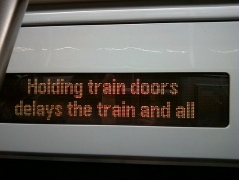 Greg Savage just shared, on The Huffington Post, his article “How did it get to be ‘OK’ for people to be late for everything?” (originally written in his blog on June 7, 2013). In it he decries the late-arriver.

“In recent years it seems that a meeting set to start at 9 am, for some people means in the general vicinity of any time which starts with the numeral ‘9’. Like 9.30 for example. People drift in at 9.10 or 9.20, or even later…. And an arrangement to meet someone for a business meeting at a coffee shop at 3 pm, more often than not means at 3.10 you get a text saying ‘I am five minutes away’ which inevitably means 10 minutes, and so you wait for 15 or 20 minutes, kicking your heels in frustration.”

He (and I agree) insists that this behavior is “rude” and “inconsiderate.”

Yes, I’m late on some occasions but only in rare circumstances and always with a “heads up” followed by a sincere apology.

But more than just tardiness, there is an overall epidemic of discourteousness in our society today, particularly here in NYC. Sadly, this is not surprising to anyone who had lived here, had a friend visit here, seen a representation of it on television or in the movies, etc.

I want to believe that this is due to a lack of awareness that people have regarding their surroundings. People plow through the city with their noses in their phones, headphones in their ears, destination in their sights.

I worry though that it is more than just a lack of awareness.  My fear is that people are genuinely becoming more uncaring than ever before.

Take for example the following 10 individuals who are wreaking havoc on our agreed upon system of appropriate behavior.

Can some (or most) of these problematic individuals be handled with a kindly “Excuse me” or “I beg your pardon”? Possibly.  I offer these in nearly all of these circumstances.  However, many of these individuals are already at Discourteous Level 11 (on a scale of 1 to 5) and are prone to ignore these pleasantries.  Which is the crux of my frustration.  If people were courteous and aware of their surroundings in the first place, there would be no need for “Excuse me” (since you wouldn’t have to find a path around them), and then there would be no need for disappointment when they ignore your plea.

People of the world.  Let’s try this again.  Let’s go back to kindergarten and revisit the Golden Rule.

This site uses Akismet to reduce spam. Learn how your comment data is processed.